When the economic recession began, the divorce rate actually decreased. Researchers who observed the trend are noticing that as the economy rebounds, divorce rates are bouncing right back with it. 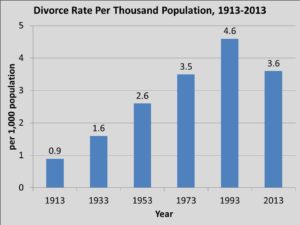 The LA Times reports that a group of researchers recently identified a marked increase in the divorce rate in 2010 and 2011 when the economy began to recover. That was after the rate sharply decreased in 2009. The group was quick to warn that they were not making any other judgments based on those numbers, though others haven’t been so cautious.

Some, like the National Marriage Project, claim that those numbers indicate that marriages are strengthened by adversity. Others point out that divorces cost money, so couples may have just been waiting to separate because they couldn’t afford it.

During the Great Depression, the divorce rate plummeted, and at that time, the change was widely attributed to the fact that people were too poor to afford a divorce. It wasn’t necessarily that they couldn’t pay for a divorce; rather, that women weren’t making enough money to be financially independent from their spouse.

If you have been waiting to initiate divorce proceedings and you’ve decided that now is the time, contact us for a free initial consultation. At Elliot Green Law Offices, we are dedicated to providing a professional, persistent service to our clients. If you are looking for a family lawyer in Queens that will protect your interests in court, Call Us At 718-260-8668 Today!

Strangely, The Study Could Not Link Other Financial Hardships To Changes In The Divorce Rate

The results of the study would seem to suggest that economic hardships prevent couples from divorcing, but attempts to apply that theory to other types of hardships fail. For instance, unemployment rates have no apparent affect on the divorce rate. Only college-educated couples tend to divorce less when a job is lost. Other studies that focused on different time periods found a strong correlation between the two, making the results that much more puzzling.

Also, strange is the fact that multiple studies suggest that financial troubles actually harm relationships, which would seem to predict that fewer couples would divorce during periods of prosperity, unless the couples divorcing now chose to separate during the economic downturn but have waited until now to start the process.

In any case, if you have decided to divorce, it is wise to speak with an attorney to ensure that your assets and interests are protected throughout the proceedings. At Elliot Green Law Offices, we are experts in all areas of family law, and we specialize in helping our clients make it through their divorces as quickly and painlessly as possible. If you would like to speak with an experienced attorney about your divorce, Call Us At 718-260-8668 Today!

Given the ongoing COVID-19 emergency, New York City has seen court closures, the increased reliance on remote court services, court delays, and rescheduling. If you are planning to file for divorce in Brooklyn, New York, you … END_OF_DOCUMENT_TOKEN_TO_BE_REPLACED

The Elliot Green Law Offices is a Brooklyn, New York law firm that may be able to help you with your Turkish divorce. Are you living in Brooklyn, but were originally married in Turkey and have questions about how you might … END_OF_DOCUMENT_TOKEN_TO_BE_REPLACED

The World Health Organization has declared the coronavirus a pandemic. As cases surge in the New York region and in New York City, officials are just beginning to take tough steps to attempt to contain the virus. As some … END_OF_DOCUMENT_TOKEN_TO_BE_REPLACED